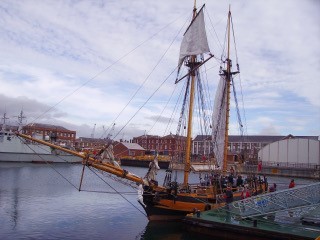 We have had more requests for tables at Trafalgar Night than space would allow. We therefore looked at running a separate Dinner on the following Saturday evening (31st). The evening is called "Pickle Night" and follows the same format as Trafalgar Night with the exception that the dress is jacket and tie (not 'black tie').

The historical background behind the evening is as follows.

Pickle was the first ship to bring the news of Nelson's victory at Trafalgar to Great Britain, arriving at Falmouth on 4 November 1805, after a hard voyage in bad weather. Vice Admiral Collingwood, who had assumed command after the death of Nelson, chose her to carry his dispatches describing the battle and announcing Nelson's death. Collingwood sent Pickle, captained by John Richards Lapenotière, back to Britain with the dispatches telling of the great victory. This was a signal honour for any junior officer, as it almost guaranteed promotion. After arriving in Falmouth, Lapenotière took a chaise to London to deliver the dispatches to the Admiralty, stopping 21 times to change horses. The Admiralty duly promoted him to Commander for this service, and the Committee of the Lloyd's Patriotic Fund gave him a sword worth 100 guineas and £500 in cash. The route that Lapenotière travelled is now known as The Trafalgar Way.

This evening is celebrated a week after Trafalgar Night and is a popular event within the Royal Navy and many civilian yacht clubs.

Show your interest by calling the Office or completing the online poll we've circulated by email.