Home / News / The Yoke trophy has been retained by ESC!

Home / News / The Yoke trophy has been retained by ESC!

The Yoke trophy has been retained by ESC! 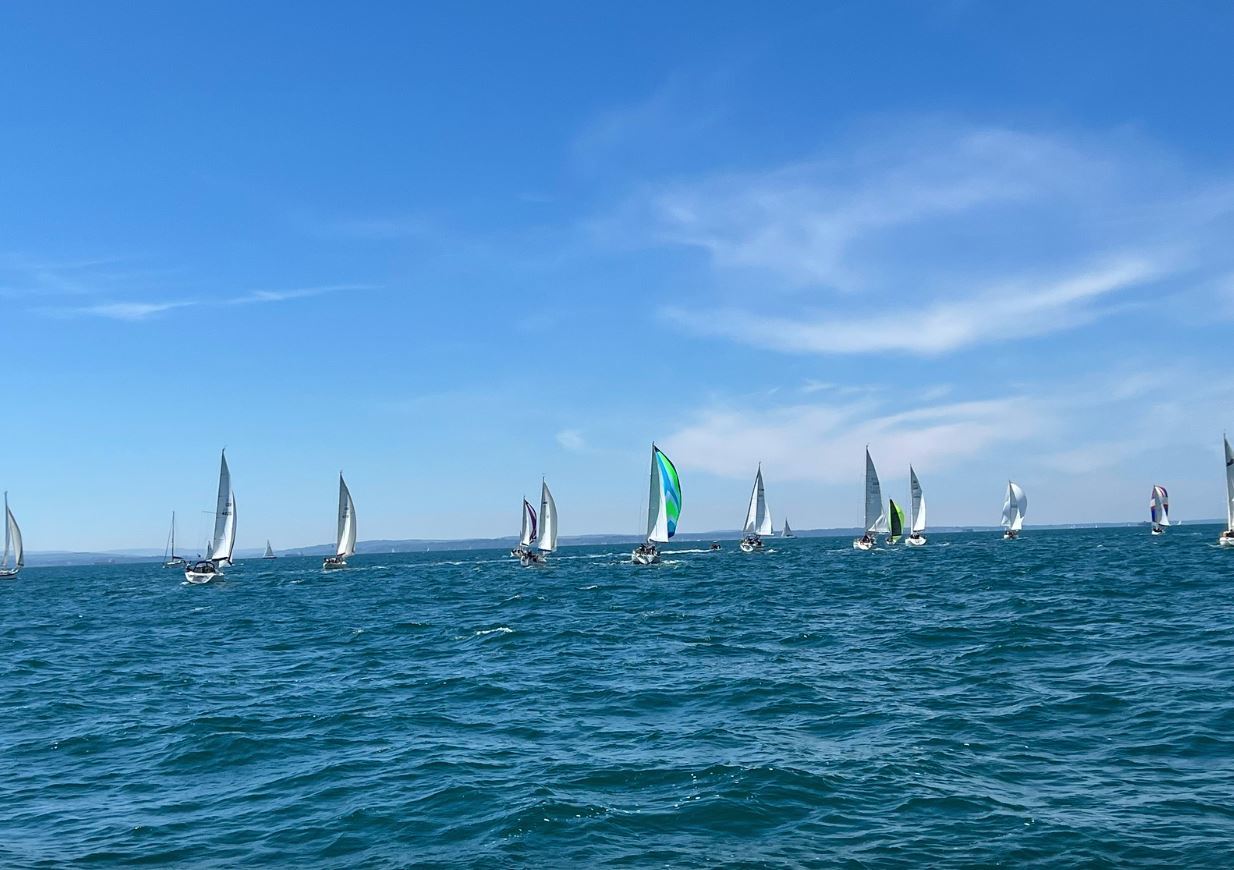 Sunshine and predominantly easterly winds made for some great sailing for this year's Yoke.

30 boats participated with all but one boat finishing - an awesome turnout.

Honours for overall individual boat went to Mike Austin of ESSC on Luna but he was closely followed by 4 ESC boats.

The first ESC boat was again Morning Bird with the Poyners leading the pack for much of the way. Phil, we will need the trophy back to engrave your name on it again!! Morning Bird was closely followed by Douglas Peniston's Polar Bear, Liz Rushall's Rag Doll and Jerry White's Smile.

Overall, our great ESC team took many of the top slots and we won by a very comfortable margin of 41 points to 74.75.

Detailed results are at https://www.emsworthsc.org.uk/cruisers-1/the-yoke-trophy, and plenty of great photos can be viewed at https://emsworthsailingclub.smugmug.com/Cruisers/2022/Emsworth-Yoke-2022.

Once they were berthed at Bucklers Hard, many boats were dressed overall for the Queen's Jubilee, which was a wonderful sight.

A very sociable evening was then had with a BBQ and fish and chips, and it was fantastic to see the clubs mingling and enjoying the evening together. A really lovely atmosphere and much camaraderie.

A big thank you to Martin Stewart for ESC and Jennie Vaughan at ESCC for arranging the race, and also to everyone who took part and made the event such a success and so much fun.

Now can we also win the Folly this year? We currently have more entrants than for many years, but the more ESC boats that enter the better will our chances be. If you enjoyed the Yoke please join us again on 18 and 19 June for our next race against ESSC.

And from the RCS ESC wins the Yoke again!

It is with great pride and excitement that 'Team ESC' once again won The Yoke defending the challenge from ESSC! Thank you to all those that participated in what I can only describe as a resounding win.

Thank you in particular to Sian Browne, our Cruiser Captain for her fantastic leadership of our Cruisers and Martin Stewart for all his hard work in supporting the organisation of this major race.

A big shout out to Mark Rushall for his talk and help prior to the race: it is always a pleasure to listen to Mark's incredible knowledge and wisdom - I always learn from you!

My last shout out is to the Gawley Family, who sailed the race as a family and introduced 2 of our junior sailors to the Yoke - well done Alex, Pippa, Ruthie and Mattie! And thank you Mattie for offering to help give it a clean before it goes back to its rightful home in the bar.

History of the Yoke

The Yoke Trophy is competed for annually in a cruiser team race between Emsworth SC and Emsworth Slipper SC. The trophy itself is a very ornate solid brass rudder yoke, about 22" long, 5" wide and 2" thick at is maxima. (A rudder yoke slots over the top of a rudder blade, long edge at a right angle to the rudder blade, with a line from each end of the yoke running forward to the steering position).

It is of a type that was fitted to an Admiral's barge, although there is no Admiralty or Royal Navy identification stamped on it. It is said that the yoke was "acquired" from an Admiral's barge by ESC Member Admiral Murray when he was a Midshipman and much later offered for sale by his wife, Meg Murray, who ran an antique shop in Emsworth.

In 1966, Fred Hillier, an ESSC member, bought the Yoke from Meg Murray's shop for £12 and presented it to ESSC as the trophy for a cruiser team race between ESSC and ESC.

At that time, although the dinghy fleets of both clubs raced together in jointly organised events, there was little contact between the cruiser members of the two clubs.

Fred's idea was to get the cruiser members of the clubs to race for the trophy and to finish the day with a social event, a tradition which has continued up to the present day. Three boats from each club contested the first race, which finished off Cowes, and was won by ESSC.

There have been varying levels of support over the years. In some years a fleet of up to 30 boats have competed. In others, the support has been so poor that Fred Hillier considered taking the trophy back and offering it to another club!