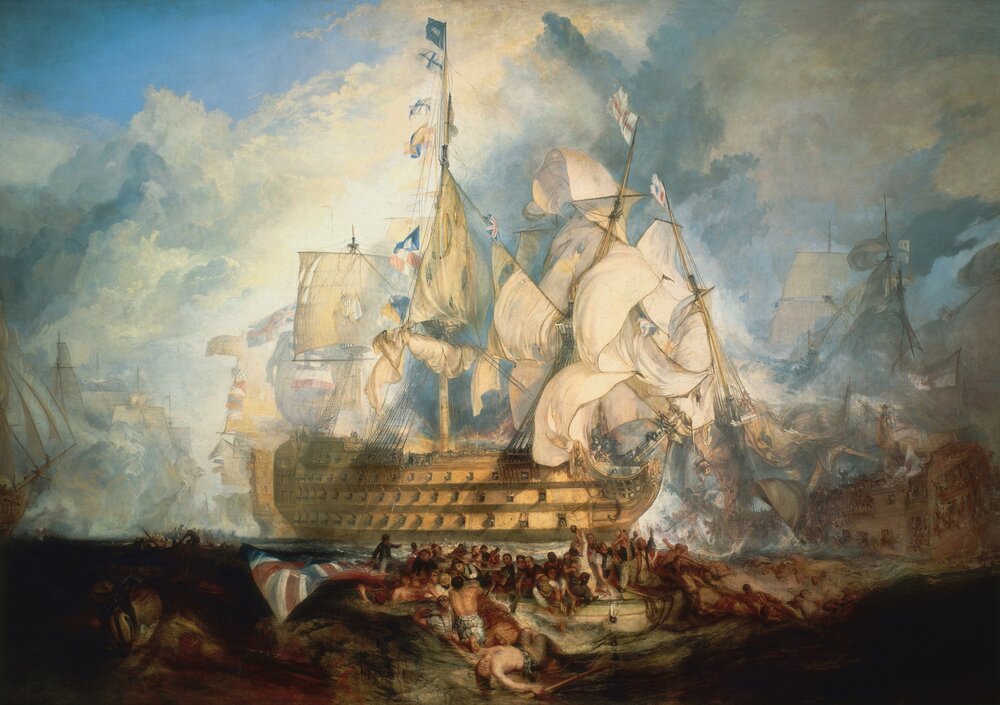 Some 250 years ago on 21 October 1805 the Royal Navy fought against the combined fleets of the French and Spanish Navies. The encounter took place in the south west of Spain near Cape Trafalgar. In a particularly fierce battle, 27 British ships of the line fought 33 French and Spanish of the line and won a decisive victory. In achieving this, 458 sailors and marines of the British Fleet were killed and 1208 were wounded.

However, there was one further grievous loss which was felt by all - officers, ratings, marines and the great British population at large. During the battle, Lord Nelson was shot by a French Musketeer and Nelson died shortly before the battle ended.

Today in both Messes and Wardrooms throughout the Royal Navy and the Royal Marines it has been the established custom and practice to celebrate the victory and to mark the loss of one of our greatest Admirals.

In recent years yacht and sailing clubs up and down the United Kingdom also follow this recognised Naval tradition by holding their own very individual and unique Trafalgar Night dinners. This year, despite the difficulties and travails experienced by both the Club and its Members, we will be coming together to celebrate as one Trafalgar Night.

The Trafalgar Night Dinner, like so much of our daily and commonplace practices, will follow a slightly format to previous years' dinners.

Outlined below are the details for the evening;

Numbers: we will be accommodating 48 members for the evening. In lieu of the usual seating format (2 long rows) we will be seated in 8 tables of 6 diners.

Booking of places: tables 1 to 7 are all open to booking, table 8 is currently reserved. When booking a table via the Members' Area we would encourage you to book with your friends in a six-person bubble. Please mark on your application which table number you wish to occupy (i.e. numbers one to seven). The bookings will be open via the ESC Office with effect from Friday 11 September.

Guests: initially the event will be open solely for members, but if we are not reaching our numbers, bookings will be opened to guests with effect from 7 of October. Please note that the person sponsoring a guest(s) will be responsible for providing the "track and trace" information.

Ticket costs: the cost of a ticket with a four-course meal is to be confirmed shortly. Commencing this year, the cost of table wines will not be incorporated into the ticket price, however a small bottle of port will be provided within the ticket price for making the traditional toasts.

The plan this year is to avoid the usual pre-gathering in the Snug Bar but to join your friends directly at your table. If everything goes to plan, your pre-ordered drinks and friends will be there waiting for you.

Dietary requirements: we would be grateful if you let Ollie know latest by the 12th of October) if you have any special dietary requirements. We wish to avoid the scenario where the main course is served to the table and the recipient of Ollie's dish says to their server "I did mention to someone that I've recently become a vegan."

Dress: this is one area that hasn't changed: dining suit/DJ, mess dress if available, medals if awarded.

Singing: our practice of sing patriotic and hearty songs has had to be put aside for 2020. However, other jollifications are planned to make the evening just as memorable as all the other ESC Trafalgar Nights.

The Speaker for this Trafalgar Night will be Major Cameron March RM MBE and his subject will be "Jack Tar The Backbone of the Nelson's Navy".

We think we have provided enough information to help you decide whether "Traff Night" is the night for you and you friends. This will be the first 'black tie' event since the Committee Dinner and we are really looking forward to seeing you and being of 'good spirit'.