Luke South reports from the RS 300 Open at Whitefriars SC 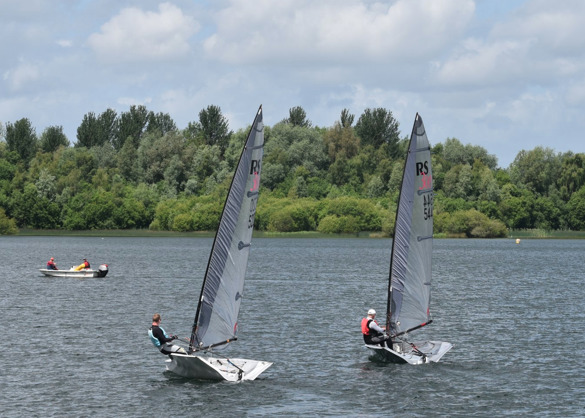 The weekend of 11/12 June saw the brave (?) Emsworth Sailing Club RS 300's go into battle on the pond of Whitefriars (near Swindon) with a huge victory for warrior Dave Acres and the worrier Luke South returning bloodied, battered but alive!

After the bacon rolls had been distributed the fleet headed out in a puffy 12-20 kts on a course taking in every corner of the pond. Dave "Two Dinners" came out of the blocks like a man possessed, tucking away 3 straight bullets, obviously mindful that Saturday night had him down for the 300 supper; included in the entry fee, and a BBQ with friends down the road. This was particularly impressive given the nature of puddle sailing and the huge shifts and gusts! Luke could only hang on to his rather long coat-tails in race 1 before sailing the wrong course in race 2 and a number of impromptu swimming lessons in race 3!

The late afternoon entertainment kicked off with a complimentary keg of ale followed by Dave's 1st dinner whilst the remaining fleet settled down to discuss the day's events over a cheese course and more complimentary beers whilst Dave disappeared for his 2nd dinner!

Sunday dawned with the 300's slowly emerging from cars, tents, vans and Dave's luxurious accommodation to blue skies and a more stable 8-10 kts, though still shifty. The day was primed for a further 3 back-to-back races, though Two Dinners, potentially feeling the weight of the previous night's exertions, failed to carry over the previous day's form with a 4th in race 1, which may not have helped when Luke's tiller fell off during a port to starboard encounter with Dave, leaving Luke to retire with no tiller and half a little finger the boat looked like a butcher's chopping board!

Race 5 and Luke was back, both tiller and finger duck-taped up and with some catching up to do. Dave, on the other hand, still seemed not to be on all cylinders after a tricky 1st beat with a big shift and the wind turning off and on which left him on the wrong side. The leading pack pulled away on a gust with no way to the front for him, though he still scored an impressive 3rd with Luke 2nd.

Race 6 and all the thoughts were whether Dave had done enough on day 1 to seal the victory with the pack chasing him down. With a timely return to form, Dave won the start followed by Luke and the pair never looked back! Which in hindsight was a huge shame as they sped off to the wrong mark 4 throwing away the leg advantage they had! Dave called it quits and headed for an early pack up and lunch, whilst Luke (having with no discard) turned back to push through from last to 3rd, redeeming some comfort from the day.

In short, Dave had enough in the bank to take the overall win and Luke was happy to finish 4th. I can thoroughly recommend sailing at Whitefriars it's a fantastic club and incredibly welcoming! Next stop for the 300's is the Nationals where Dave and Charlie this time will do battle again on behalf of Emsworth SC!