Tales from the Archives - Reminiscences from Frank Bailey, the Club's longest-serving member 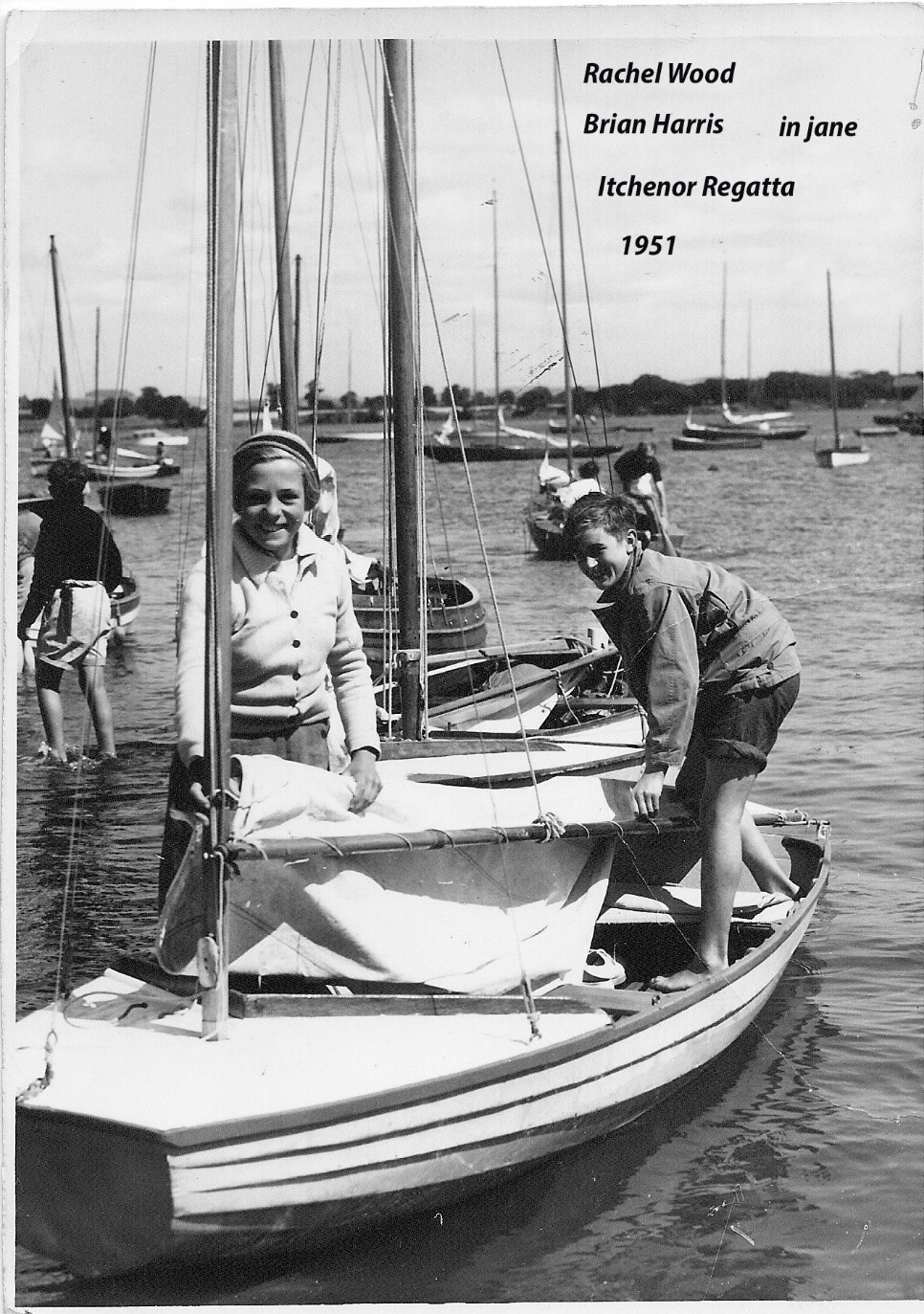 Frank and his family joined the club around about 1946 when he was 8 years old.

His father was a London policeman and the club, with remnants of the old upper-class attitudes and run by a cohort of admirals, was unsure whether he would be appropriate. In other words, was a policeman to be classed as an unsuitable "Tradesman"? However, he was able to show that his father had been an officer in the Royal Navy and lived near the admirals in Beach Road, Emsworth. So, on those grounds, the Bailey family were accepted as new members of the club.

At first they sailed and raced the One Designs which could be hired from the club. They would sail down to East head and have picnics on the beach. He recounts one story of 1946, when his mother was gathering fuel for the fire and inadvertently included a small mine detonator into the mix. On lighting the fire the inevitable explosion was a shock but the only damage was a big hole in the filled kettle. Later his grandmother was furious because they had blown a hole in her best kettle.

At that time (1946) military personnel were still searching East Head for unexploded munitions. Also, there were aircraft regularly flying overhead firing rockets at the wrecks off West Wittering sands which were used for target practice.

A little later he and his family plus two Yorkshire cousins (Cath and Rachel) used to stay with their grandmother in Emsworth during the School summer holidays. These were idyllic sailing times. He, his two Yorkshire "lasses" and his friend Brian Harris formed the crew of two small 10ft sailing dinghies. Frank's boat (his first) was a 10ft varnished clinker-built sailing dinghy equipped with a Gunter rig, sail reefing, oars, anchor, centre board and fixed rudder and a small bowsprit for the jib. There was no added buoyancy and a bailer was essential. It was called Jolly Roger. The second dinghy, Jane, was borrowed by Brian from the Deburiate family. It was a fully equipped 10ft pram sailing dinghy with a single Gunter rigged sail.

They started racing and taking part in regattas all over the harbour. They were accompanied by his parents and other club members who were also racing at the regattas. They went as far as Itchenor, Bosham and Dell Quay, the adults acting as shepherds. To their credit the dinghies won a number of junior races. They occasionally took part in the point to point races on the journey down the harbour to the various regattas.

The concept of a 10-foot dinghy coming all the way from Emsworth and taking part in several regattas was quite unusual. Naturally they were extremely careful with the weather and tide sometimes postponing the return home till the following day, staying overnight at Itchenor. In those days, there were no safety boats either for the regattas or to guard them on the way down the harbour and back so it relied on the generosity of club members to accompany them. Nobody wore buoyancy aids either.

One time they had to come back from Langstone Regatta in a terrific thunderstorm, but with no wind! Frank wound up rowing Jolly Roger home along Sweare Deep.

Another more dramatic incident occurred on the afternoon return home from an Itchenor Regatta. Against a strong breeze, Frank and Cath in Jolly Roger were able punch through short seas and reach Emsworth, his parents in a club boat acting as shepherd. However, Jane, with Brian and Rachel on board, kept getting swamped by the short seas. Eventually the skipper of the club boat which was acting as their shepherd intervened. It was decided to evacuate the crew, de-rig Jane and stow the mast and sails. They then attempted to tow Jane behind the club boat. This worked for a while but progress was very slow and eventually the club boat skipper decided to cut the water logged Jane adrift near Pilsey Island. The club boat got back to Emsworth late, with two of the crew tearful and very upset.

The event had a happy ending through the help from Jack Dalgleish. Frank says that Jack Dalgleish. "Was the bosun, odd job man and part time steward all in one. He had an impressive war record in the commandos. He was eventually captured at Dieppe and passed the years after 1942 in a prisoner of war camp. He was a great ally of us children".

Children were not allowed in the clubhouse and outside they were often forced to do club maintenance by the admirals of the club who were strong disciplinarians and to quote Frank, "Children were made even to antifoul the club boats". Altogether there was a lot of coercion from what was considered then to be the upper classes, Jack acted as a sort of buffer against the strictness of the admirals and was an excellent support for the children.

So, when on the following day after the loss of Jane, Jack, no doubt fed up with their long faces, said "Let's all go and find her then". So off they all went in the Club Motor Boat (unnamed). After searching for a few hours around the harbour entrance, a passing yacht told them that they had seen some "thing" near Pilsey Island. They went to investigate and saw the transom of Jane just visible below the water. Remarkably on closer inspection showed the transom was still attached to the rest of an undamaged hull with all her gear intact. She had anchored herself bow down with her bow compartment filled with sand. She was found yards from where she had been cast adrift. Jane was recovered and they all returned home happy and in triumph.

This condensed transcript made by the Historical Records Group in 2020 is from the 2015 video which is available in the HRG records. 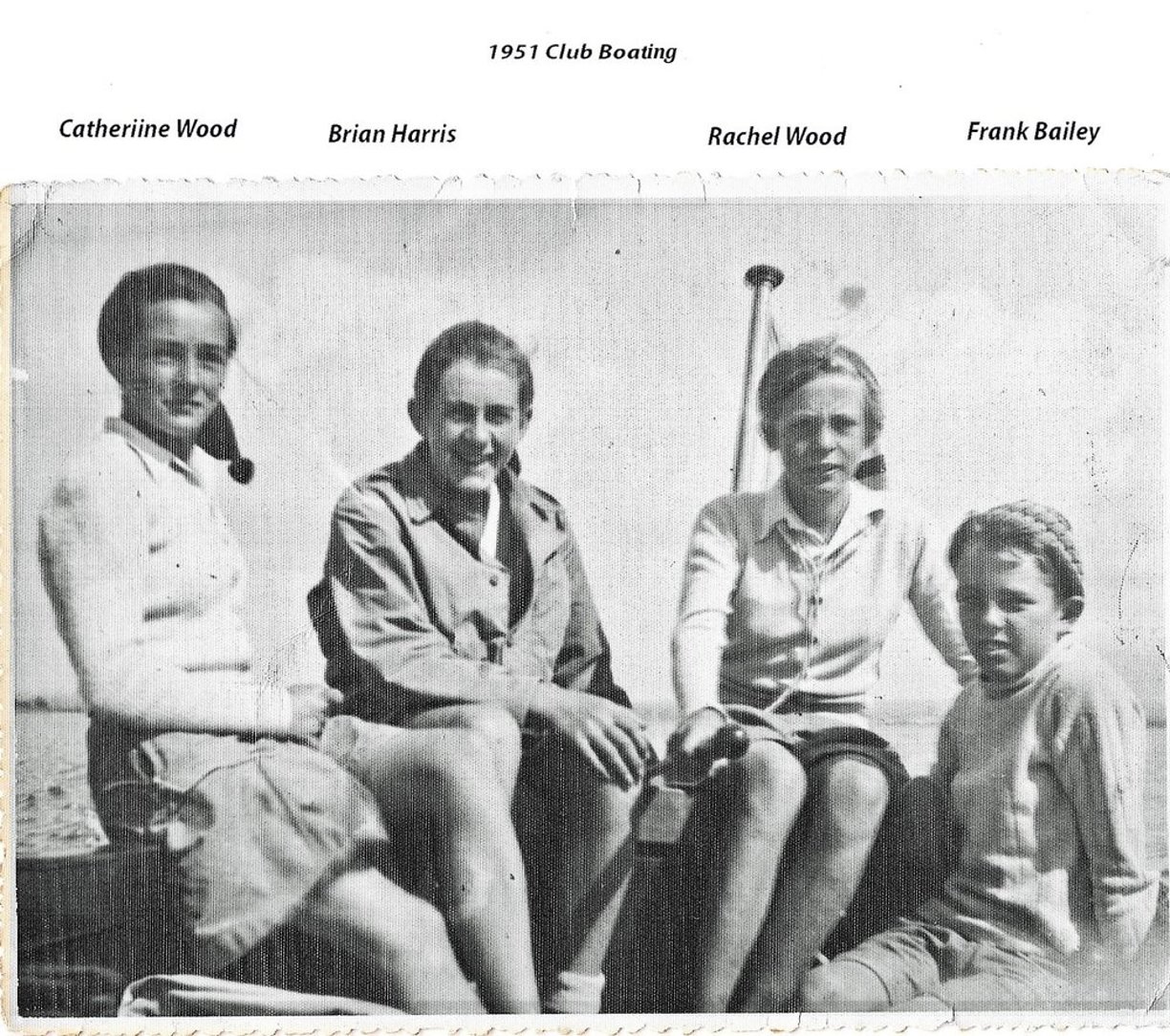