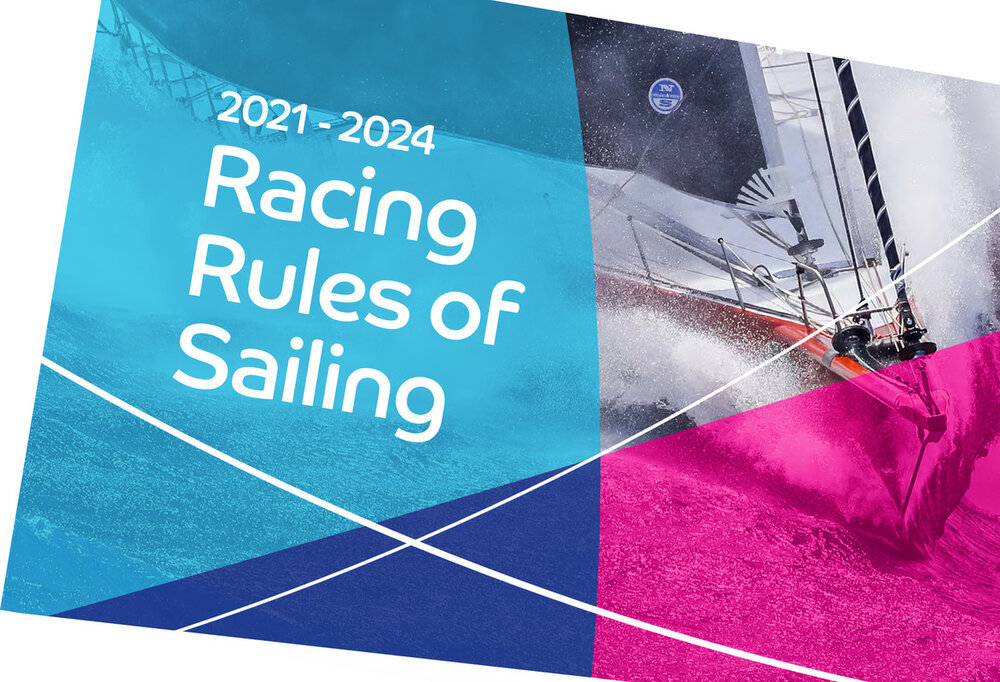 I'm sure that everyone is as excited as me to be getting back on the water soon. Every four years, the Racing Rules of Sailing are updated: for this cycle there are a few small changes that are worth looking at while we are still grounded.

Though the changes are small, I'd really urge you to update your hard or electronic version: there are lots of rules number changes and as I found this week it is very confusing trying to help someone who is referring to an old version.

The rules are available to view and download from the World Sailing website: www.sailing.org, and the printed version, complete with RYA prescriptions, is available from the RYA bookshop.

I really rate the World Sailing/RYA integrated rules app: this enables you to click on a defined term to get to the relevant definition instantly, and also cross references the rules to the casebook. What is the casebook? It's a compendium of interesting cases, that are published to clarify the meaning of the rules in question.

Where a hail is required by the rules, the hail does not now have to be in English so long as it is reasonable for it to be understood by everyone involved. I'm looking forward to learning what "room to tack" sounds like in Japanese!

Any word in italics is defined at the front of the book: if you are not sure which side of the boat is the windward side when you are head to wind, you'll find out in the definitions.

The biggest change here is in the definition of start. We now start when any part of the hull crosses the line from the pre-start side. So, on an upwind start, a trapeze crew could feasibly be over the line at start time with no need to return: handy for spotting transits! Though "hull" is not a defined term, World Sailing suggest that spi poles, bowsprits, gantries etc are not a part of the hull, but wings are (though this could be changed by class rules!)

Similarly, we will now finish when any part of the hull crosses the finish line.

This change is also reflected in rules 29 and 30 (recalls and starting penalties). It is only the hull, not the crew and equipment, that need to return to the prestart side of the line, or cause you to be penalised through the I, Z, U or black flag rules.

The Mark-room definition did not explicitly include room to avoid touching the mark: it does now!

There is a new definition of "sailing the course". That means that rule 28 (Sailing the Race) is now much simpler. This definition is also used in the scoring appendix, and the race committee can now score a boat "Did not sail the course" without a hearing. Previously they had to protest. If you are scored DNSC, and want a hearing, you'll now have to request redress.

"Sail safe, sail fair, and follow the rules" is a rough summary of the six fundamental rules. Some have changed number and moved around a bit, but the biggest significance is that the penalty for breaking the fair sailing rule (rule 2) is now once again a non-discardable disqualification (DND), as it was before 2017. A typical rule 2 violation would be not taking a penalty having knowingly hit a mark: counting a disqualified could make a big dent in your series score in that case!

Now we get to the part of the rulebook I'm interested in: very few meanings have changed here.

Section A is titled "Right of Way". I dislike this description: it is never the case that one boat has the right to plough on regardless. We are always required to avoid contact with another boat if reasonably possible. (rule 14). I prefer to think of section A and some of section D ("Other Rules") as keep clear rules: whenever two boats get close to each other, there is always a keep clear rule that will apply between them.

The well-known ones (port-starboard; windward-leeward; clear astern clear ahead; tacking) have not changed. The more specialised keep-clear rules (starting errors; taking penalties; backing a sail) have changed in number only, apart from one small but significant word. A boat returning from an early start is now keep-clear boat only until her Hull is completely behind the line.

Section B is headed "General limitations".

These rules don't change which boat in a situation is the keep clear boat, they either give more responsibilities to the keep clear boat, or limit the actions of the other boat in some way. This section includes anti-contact, situations where right of way changes, changing course, and sailing above a proper course.

Rule 14, the anti-contact rule, has not changed in its application, but all situations including this, where a boat might avoid penalisation from breaking a rule, have been elegantly scooped up and put into new rule 43: "exoneration".

Rule 16.2, the anti-hunting rule, now only applies to a starboard tack boat that is on a beat to windward, i.e. when the proper course to the next mark is close hauled or above. If a port tack boat is ducking a starboard tack one, the starboard boat must not bear away if the port boat would need to immediately change course to continue keeping clear.

Section C: "At Marks and Obstructions", is the catalyst for the most interesting rules discussions. I'll repeat: these rules do not replace the keep clear rules: they may add a responsibility to a keep clear boat or limit the actions of a right of way boat.

There are very small changes to the mark rounding rule (18). It is now clear that the rule no longer applies when mark room has been given according to the mark room definition. This may allow a boat that is just clear astern to stop the boat just ahead gybe-setting onto port tack on the exit.

There are no changes in meaning to the "Room to pass an obstruction" rule (19).

A significant change to the "Room to tack at an obstruction" rule (20), is that if a hail might not be heard, a boat needs to make a signal that clearly indicates a need for room to tack, or a "you tack" response.

Section D is headed "Other Rules".

It includes the special keep clear rules mentioned above, the requirement to avoid a capsized, anchored, or aground boat if possible, and not to interfere with a racing boat when not racing, or a boat taking penalties or on another leg. None of these have changed.

Conduct of a race

This part of the rules summarises what a competitor might expect a race to look like, and what they need to do to get a finishing position.

The Notice of Race must now be available before a boat enters. It does seem sensible that we know what we are letting themselves in for before we commit to joining in!

Other requirements while racing

This section is now much easier to find your way around as it has been split into two sections: general, and equipment related. The rules have moved around a bit so is worth a browse: Here are the most significant changes.

You are now permitted to pump upwind as well as downwind. "Lowriders" can pump once to promote surfing or planing; foilers can do this any number of times to promote foiling.

The conditions when a boat can be exonerated for breaking a rule in the "when boats meet" section, are now all included in rule 43.

The only change in meaning, is that previously you could not be exonerated from hitting a mark unless you were compelled to hit it by a keep clear or give room boat: i.e. there was no option to bail out. Now you can simply be exonerated if you hit the mark as a consequence of the other boat's actions.

The anti-trash rule, now rule 47, also applies to coaches or other support persons, and it cannot be changed by the Notice of Race or Sailing Instructions.

If you fall out, you no longer have to be back on board before you continue sailing towards the next mark. Holding on to the gunwale is good enough!

This part of the rules covers all the off-the-water processes that deal with rules infringements. Again, changes are mostly clearing up, rather than changing meaning.

A boat, race committee, or technical committee can report misconduct under rule 69, or a rule infringement by a support person, to the protest committee.

You have always been able to request redress if your score has been affected by damage or injury caused by a boat breaking a rule of part 2. Now, your request will fail unless the other boat has taken a penalty or is otherwise penalised.

Requests for redress normally have the same time limit as for protests: a request for redress based on a protest committee decision must now be delivered within 30 minutes of the decision being posted.

As far as the hearing itself is concerned, there is improved clarification for the protest committee which everyone involved should read carefully before getting involved with a hearing. Two or more protests involving the same incident can be heard together (except for a 69 hearing), hearsay evidence shall be considered, irrelevant or unduly repetitive evidence excluded. The protest committee is directed to give appropriate weight to the evidence presented, and in most situations, decisions should be made on the balance of probability.

A request to reopen a hearing must now be in writing. If the request concerns new evidence, the protest committee should be the original one if practical: if it is based on an error, it should have at least one new member.

Thanks for reading this whistle-stop tour of your new rule book. Don't forget, if you want some ideas on how to use the rules to improve your tactics, you can get a signed copy of my book from my website: www.rushallsailing.com