Home / News / Tales from the Archives - A Close Shave

Home / News / Tales from the Archives - A Close Shave

Tales from the Archives - A Close Shave 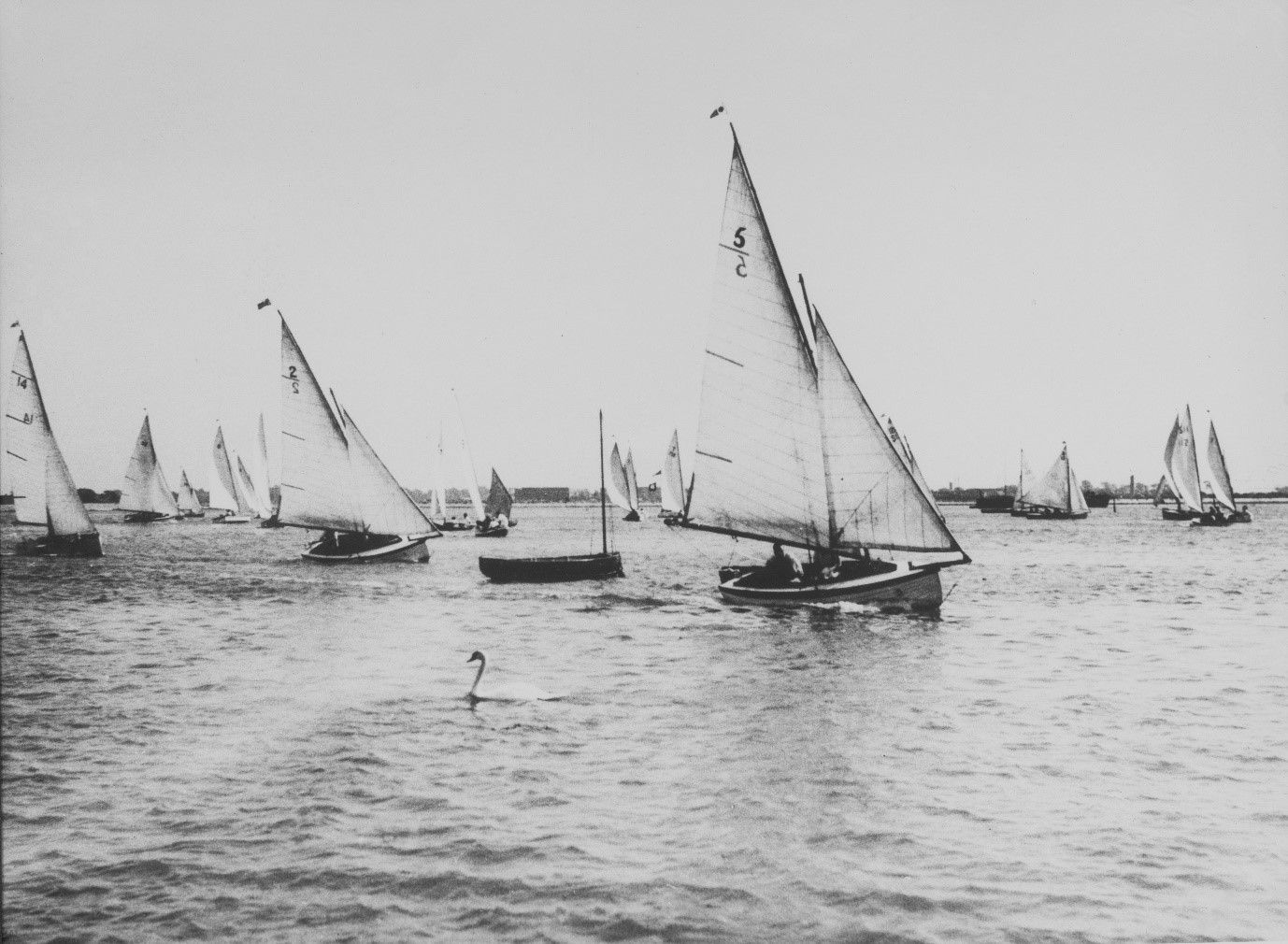 It is easy to forget how much sailing in the harbour has changed. For the first five years after the Second World War the pre-war built Emsworth One designs were being used, with members often going as far as Itchenor. The boats were not set out like a modern dinghy and demanded much physical effort to sail them. The mainsheet had only a small purchase and the big gunter mainsail exerted quite a pull. There were many fewer boats in the harbour then, and no rescue boats to mother the competitors. A capsize could prove fatal; added to which Frank Bailey, our longest-standing club member, recalls that a boat was disqualified from a race if the tip of her mast touched the water.

This is well illustrated by the following Tale:

On 16th May 1946 at about 1315 hrs. Mr Scott Jeavons set sail on EOD No. 8 crewed by Mrs Jacynth Pratt, on passage to Itchenor and back. The day was overcast with a fresh sou-westerly breeze. A reef was considered unnecessary. They tacked down the harbour until the Admiralty raft moored on the edge of Pilsey Sand came abeam, then eased sheets to reach over towards Chichester Channel. At about 1500 hrs. when off Stocker Sands the weather began to threaten and they prudently decided to turn for home. While beating towards the Wittering shore they were struck by fierce squalls from three different directions in succession, each squall separated by a brief period of complete calm. This is an uncommon event but one well described by other seafarers. The second squall gybed them, they drifted onto the southern edge of Pilsey Sand and grounded. The final squall gybed them again and, being aground, No. 8 rolled over and filled.

It was May. Skipper and crew were up to their necks in water with the chill of winter still in it, only an inch or so of gunwhale showing, spray slashing into their faces. There was no possibility of righting the boat, nor could Mr Jeavons reach the anchor which was well below the water. They tried but were unable to attract the attention of fishermen sitting on the Admiralty raft half a mile away. The ebb was running and the wind settled into the north-east pushing them off the sand's edge into the channel again. In this precarious situation they were swept down the harbour and through the narrows at Sandy Point. No-one saw them and they were making three or four knots towards the Nab. As Mr Jeavons said, 'Things began to look slightly more complicated'. Finally they were spotted some way south of Treloar Hospital [which was located at that time on Sandy Point] and picked up by a motor boat whose skipper declined to take No. 8 in tow as he was getting short of petrol. They were landed at Treloar Hospital, Mrs Pratt unconscious and Mr Jeavons cannot have been in any too good shape - though he does not admit it.

A simple enough accident, more bad luck than bad seamanship, but it could have easily resulted in a death. Fortunately they both recovered from their ordeal and No. 8 was eventually salvaged at a cost of £10.

So perhaps the message for us today is: Stay safe, on the water as well as off it!

Excerpt from The Story of Emsworth Sailing Club by Hugh Robinson taken by Historical Records Group, May 2020. 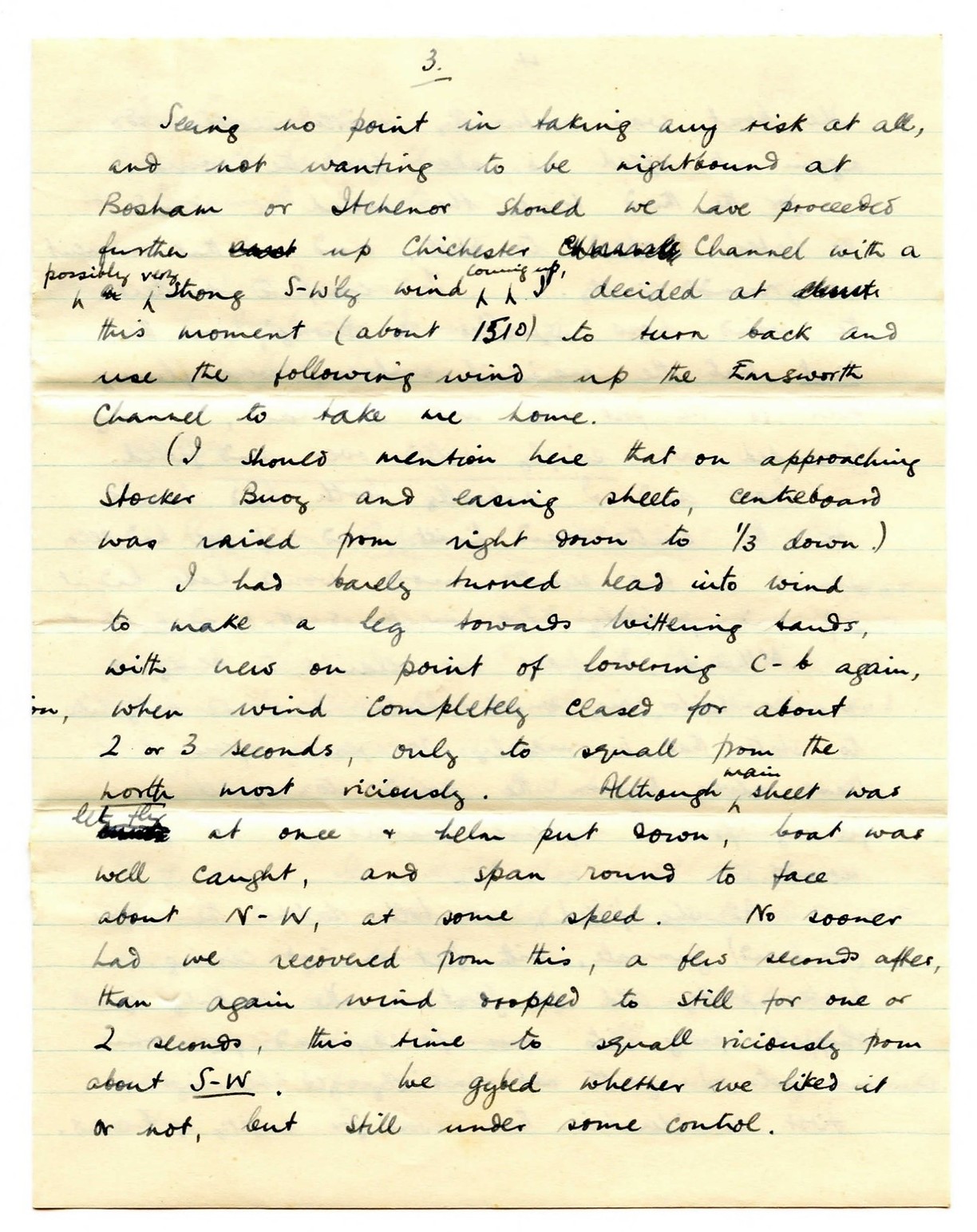